The Novella Spy-Birds, Call for Revolution is a colorful excursion into the subject Technology usage in the 21st century.

Spy Birds, Animal Kingdom- Call for Revolution is an allegorical novella in the footsteps of Animal Farm; instead of fighting labor slavery by humans, animals revolt against the misuse of technology.

Lazy Fellow narrates the turbulent story of thinking animals, whose main protagonists BigNose, Leon de Ponso, and Lionesse revolt against the mind control on Earth and venture into the Animal Kingdom on Mars. This Spy-Birds book—a fairy tale—is politically and educationally infused and a fun reading lecture about the mystic mission of Animal Kingdom on Earth and in Space. 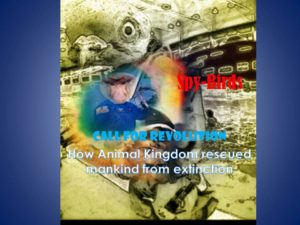 The Mesotes teachings by Aristotle are the animals’ religion and guide the characters in action and wise decision-making. The rules of too much and too little—how much virtue should be applied in a specific given situation and time. The animals’ decisions are based on value and no value, and the Anthem of Freedom is the reminder of the challenges and the conflicts of Animal Kingdom and Animal Kingdom in Space. The soul of the story is about the loss of emotions and the overtaking of Technology in life. Mankind is in a transitional century—possibly essential for the forthgoing of the species.

Generations of children will be challenged in so many fields of negative circumstances that dictate the future of mankind. In my opinion young adults and children should be informed about the danger and threats of the misuse of technology early in life. I feel, my job is to address this negative trend in an imaginative, humorous and likable way for juvenile readers.

The fairy tale Spy-Birds, Animal Kingdom – Call for revolution fits the niche; the lecture captures the reader’s interest in the first few pages, like a great tasting candy. The closer you get to the core, there will be a slight change of taste or undertone which makes you think and inspires to do some own research.